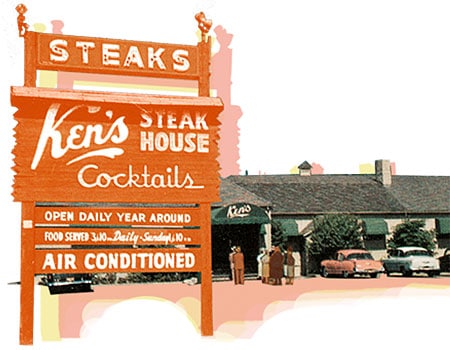 THE HISTORY OF KEN'S STEAKHOUSE

Times were hard in 1935. Millions of people were out of work, businesses were failing, but as Ken said: "We had to make a living and take care of our children"

Ken and Florence Hanna opened a small restaurant in Natick on Route 135 across from Lake Cochituate. They called it the Lakeside Cafe. The customers always identified it with its owner and called it Ken's. From these small beginnings a great restaurant was born.

In 1941, after five years at the Natick location and one at Sandy Burr Country Club in Wayland, Ken purchased McHale's Diner with eleven seats and one booth on Route 9 in Framingham. Route 9 was known as "Starvation Alley." Ken had a vision of prosperity for the area, now known as the "Golden Mile," one of the top retail locations in the entire country.

Growth of Ken's Steak House, originally known as the 41 Cafe, began almost immediately with the addition of the Fireplace Room in 1941. It was rustic with picnic tables, benches, knotty-pine walls and a fireplace that literally heated the room in the winter.

Most of Ken's regular customers followed him from the Natick location to Framingham. Ken and Florence had a sound formula for success: good quality food at reasonable prices, an honest drink and a good cup of coffee. Diners at Ken's received prompt, courteous, attentive service. Ken's salads became famous and were instrumental in the restaurant's growth. Ken's salad dressings were always prepared in accordance with the recipes of Florence Hanna and under her watchful eye.

In 1945, right after World War II, Ken added a room behind the fireplace and enlarged the diner to 80 seats, now known as The Lamp Post Room. The Hickory Room with 100 seats was added in 1957 and the lounge renovated. In 1959, Cafe V opened. The Dining Room became famous for prime sirloin of beef, planked scrod and distinctive side dishes. Ken also added a French farmhouse motif for the new entrance and the expanded lounge.

In the late 1940's, Florence Hanna began baking bread, onion rolls, cakes and pies in an effort to deliver the freshest, highest of quality baked goods to her customers. Today, the tradition continues, the staff at Ken's Steak House spend long hours creating a showcase of fine quality baked goods.

Over the years, many of Ken and Florence's children and grandchildren have worked at Ken's Steak House. At present, the family tradition of providing superb food and excellent service is orchestrated by Ken's son Timothy and his wife Darlene.

Famous entertainers, prominent athletes, political and business leaders have en joyed Ken's Steak House throughout the years. The goal of Ken and Florence Hanna was to treat all their customers as celebrities. The prime and choice cuts of beef and the fresh seafood found at Ken's have set a standard of quality that is unparalleled. Ken's Steak House has served the MetroWest area for over 68 years, and shall continue be here to serve you through the next millennium.